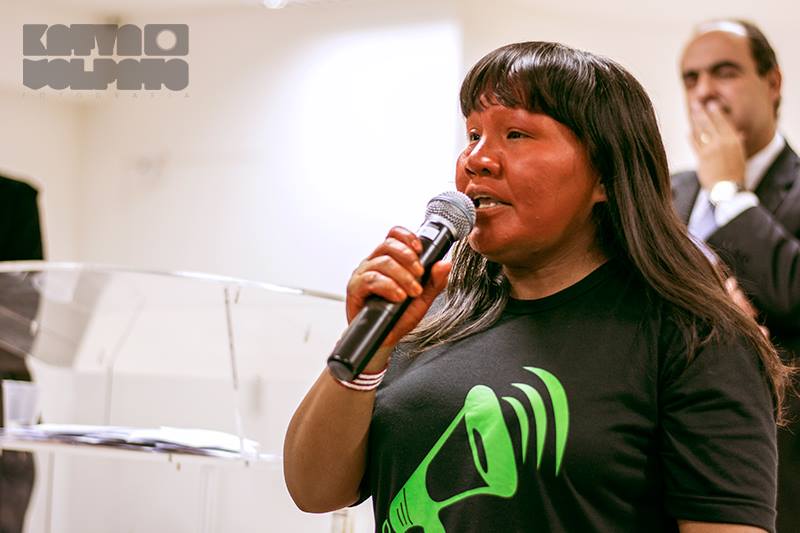 “Please keep my daughter with you. I cannot keep her, I’m going back to the village.” Muwaji Suruwaha.
Muwaji’s words caused us great pain.

Of course we would have adopted little Iganani with great joy. That’s not the problem. We know that Muwaji loves her daughter with all her heart, and that she has already paid a very high price to preserve her life. The problem is not that she does not want to keep her daughter with her, but rather that she is unable to stay in Manaus under the conditions that the government offers her.

Muwaji spent seven months last year living in the city so that her daughter could receive medical treatment for cerebral palsy. Part of this treatment was done in São Paulo and Iganani was getting excellent results. The doctors said that if she continued that way she would probably be able to walk and could live in the village again. Muwaji was filled with hope and returned to the tribe only to visit her relatives and let them know that she needed to return to São Paulo for a longer period of time. It was not easy in the village, because even with the progress she had made, there were still people wanting Muwaji to poison her daughter. But she held her ground, bid farewell to her relatives, and returned to the city. Only, for some reason, FUNASA decided that the treatment should be given in Manaus, and not in São Paulo, as it had been previously agreed with her. That was a big mistake.

Although we always have someone from our team living with them at CASAI (a support house for indigenous people), Manaus has been a nightmare for the Suruwahá family. They are isolated Indians, but even so they are having to live with about 200 unknown people, indigenous people of different ethnicities. Muwaji, her brother and children are forced to live daily with sufferers of various types of diseases, such as tuberculosis, AIDS, rotavirus, as well as innumerable viruses and diseases as yet undiagnosed. Muwaji and the children have already contracted influenza, diarrhea and fevers. They spend most of their time locked in tiny spaces for fear of forced contact for which they are not yet ready. They spend their days terrified of contracting illnesses and intimidated by not understanding what is happening around them. They are not comfortable for a minute and, despite the heat, they are afraid of even wearing a thong, as they do in the village. As the semi-isolated Indians they are, the Suruwahá should never be living in a house like this. They run the risk of returning to the village contaminated and causing a wave of unprecedented deaths (but FUNAI agents say that this is inevitable and that it is normal for half of the tribe to die in contact!).

As if that were not enough, Iganani’s medical treatment is simply not happening. In order for her to have the chance to walk, Iganani needs intensive treatment with a multidisciplinary team, as she had in São Paulo. The treatment here is being done by the SUS (Brazilian national healthcare system). She has not been evaluated by any neurologists and she is only doing 15 minutes “daily” of physiotherapy. But the last session was on February 25 and the following session was scheduled for March 15. Like this, not even her mother believes in her improvement. Putting all this together, it is not difficult to understand Muwaji’s dismay. She has to choose between living indefinitely in unbearable conditions, risking her life and her children’s, with no hope in her daughter’s treatment, or going back to the village, poisoning herself and letting another person kill her daughter. She is living in an awful dilemma, and handing little Iganani over to me seems the only way out. An extremely painful way out, but it seems to be the only one possible.

But is there really no other way out? We are preparing a proposal for FUNASA. We want them to be placed in another house, or in a small ranch near Manaus. A place just for the Suruwahá, where they can be safe, comfortable, eat their traditional food and wear thongs. Our team, which is already providing 24-hour assistance at CASAI, would stay with them in this new house. We know that there is a lot of opposition and that many people do not want us around the Suruwahá, but we believe that this is the only way for them to stay on for treatment. This needs to happen urgently because they are already at the limit of their ability to withstand this situation. After that we need to take a look at the status of Iganani’s medical treatment. Something has to change. For her this is the possibility of escaping from infanticide and of continuing to live with her family. Does not she have that right?

Continue with us because we need your support to give the Suruwahá hope for a future different from that of the other tribes that have come into contact with this “civilized” world. We must continue to strive for life and respect for the rights of indigenous peoples.