The Indian Child who was Buried Alive 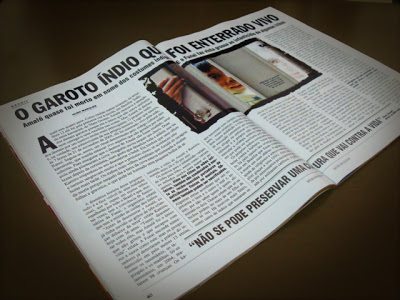 Amalé is four years old. Like many other children, he went to school for the first time on Thursday, February 12th, in Brasilia. A Kamiurá Indian from Mato Grosso, Amalé attracted attention from the rest of the children because he was the only child who was without a uniform and a backpack. But Amalé stands out from the rest for a much more troubling reason. The little Indian is actually a survivor of his own history.

After being born, November 21, 2003 at 7 am, he was buried alive by his mother, Kanui. She was carrying out a ritual prescribed by the cultural norms of the Kamaiurás, which require that children of unwed mothers be buried alive. To seal the fate of Amalé his grandparents walked on top of the mound. Nobody heard even a cry from the child. Two hours after the ceremony, in a gesture of defiance against the whole tribe, his aunt Kamiru set out to disinter the baby. She recalls that his eyes and nose were bleeding profusely and that he first began to cry only eight hours later. The older Indians believe that Amalé only escaped death because that day the earth of the pit was mixed with numerous leaves and sticks, which could have created a small air bubble.

The dramatic story of this little Indian is the visible face of a cruel reality, one that is repeated in many tribes spread throughout Brazil and that is often done with the connivance of the administrators of the National Indian Foundation (FUNAI), the government agency that cares for Indians.

“Before digging up Amalé, I had already heard the cries of three buried children,” says Kamiru, today 36 years old. “I tried to dig up all of them, but Amalé was the only one who didn’t cry and escaped with his life,” she says. FUNAI hides many cases like this one, but the investigators have discovered the practice of infanticide in at least 13 ethnic groups, such as the Ianomâmis, the Tapirapés and the Madihas. The Ianomâmis alone, in 2004, killed 98 children. The Kamaiurás, the tribe of Amalé and Kamiru, kill between 20 and 30 per year.

The motives of infanticide vary from tribe to tribe, as do the methods used to kill the little ones. In addition to the children of single mothers, handicapped and mentally retarded children are also condemned to death. Twins can also be sacrificed. Some ethnic groups believe that one represents good and the other evil, and therefore, because they don’t know which is which, eliminate both of them. Others believe that only animals can give birth to more than one offspring at a time. There are other motives, even more worthless, such as cases of Indians that kill those who are born with simple birth marks – those children, according to them, might bring a curse upon the tribe. The rituals of execution consist in burying alive, choking, or hanging the babies. Generally it is the mother herself who must execute the child, although there may be cases in which she can be helped by the father.

The Indians themselves are beginning to rebel against the barbarity. At this moment, there are at least ten indigenous children in Brasilia who were condemned to death in their villages. They fled with the help of religious people and survive in the capital thanks to a private organization, Atini, directed by protestant missionaries and supported by Catholics.

An official policy of FUNAI is to send exiled tribal members back to the jungle, which means putting their lives at risk. “It isn’t true that there is more violence and cruelty against infants among indigenous people than in the general population,” asserts Aloysio Guapindaia, acting president of FUNAI, in a written response to ISTOÉ. “The topic, treated in a superficial way, reveals prejudice against the customs of indigenous people.”

There are Indians who don’t agree. “No one in the government helps us to resolve the problem,” complains Kamiru, with the help of an interpreter. The reward for her gesture of defiance against the customs of her people comes from the one she saved. “My real mother isn’t my mother. My mother is Kamiru,” says the little Amalé.

Another Indian who dared to confront the tradition was Juraka, who is also a Kamaiurá, from a village close to Amalé’s. She has taken refuge with her daughter, Sheila, nine years old, in a shelter next to the Granja do Torto (one of the official residences of the President of Brazil). The child receives treatment in the Sarah Kubitschek hospital. She was born with progressive muscular dystrophy, a disease that makes her unable to walk. The tribe discovered the problem when it was time for Sheila to take her first steps. The mother fled before she was required to apply the tradition. “I don’t like this custom of burying people alive,” says Juraka, also with the help of an interpreter. In the hospital the doctors said that there is nothing they can do. Sheila will have to spend her life in a wheelchair. “She is the one I love most in this world, more than my other children,” says Juraka. Mother and child have returned several times to the tribe. The Indians have come to respect the courage of Juraka and have begun to accept Sheila.

“It’s absurd to close one’s eyes to genocide against children, under any pretext,” says Edson Suzuki, director of Atini. “A culture that goes against life cannot preserve itself. Having black slaves was also once a cultural right.” Suzuki is raising a child named Hakani, from the Surwahás of the Amazon rain forest. She is thirteen years old. The girl was born with difficulty walking. Her parents refused to kill her; they committed suicide instead. Her older brother, fifteen years old at the time, tried to strike her face with a machete, but she survived.

“Infanticide is a destructive traditional practice” says Maíra Barreto, an attorney who is researching indigenous genocide for her doctoral thesis at the University of Salamanca in Spain. “And the worst aspect of this is that FUNAI has become infected with that cultural relativism that regards genocide as correct,” says Henrique Afonos, a Worker’s Party representative from Acre, and author of a bill that would punish any non-Indian who fails to give aid to a child who is in danger of death.

Away from the tribe, Amalé wants to continue going to school, but is demanding a backpack. He now speaks Portuguese well and says that he likes cars a lot. He wants to drive one when he grows up. “We are going to learn much more from Amalé than he learns from others,” says Aline Carvalho, director of the school.

“A culture that goes against life cannot preserve itself.” – Edson Suzuki, Director of Atini

Translated by Matthew Cullinan Hoffman for LifeSiteNews.com, with permission from the author and publisher.