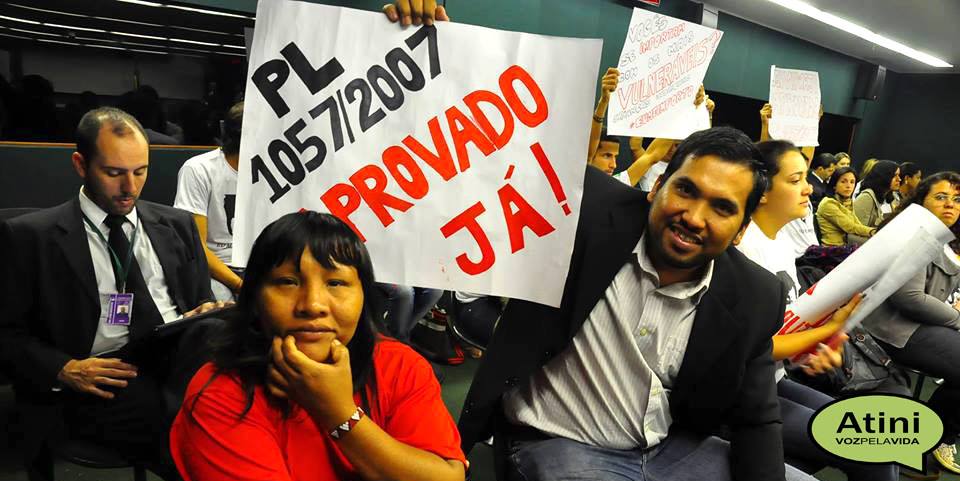 Exactly 10 years ago we had to make one of the most difficult decisions of our lives. A decision that completely changed the course of our history as a family. A decision that affected a nation.

Ten years later I observe, from a long distance, Brazil debating the passage of a law – The Muwaji Law – that was born in our hearts as we fought to defend two families of the Suruwahá tribe.
Here is the text of Fantástico’s first report, on September 18th, 2005.

THE DRAMA OF TWO LITTLE ZURUAHA

Fantástico – 18.09.2005
Our reporters follow the adventure of two newborn Indian girls who were left to die in the middle of the forest. The two Indian babies were taken from the Amazon to São Paulo by a group of missionaries. If they had stayed in the woods, the babies would have had another destination: tribe culture dictates that they should die because they were born sick. Now, to receive medical treatment, they must win a new battle – against the bureaucracy.
Sumawani is only six months old. Almost nothing in the scale of a lifetime. But in her case, having come this far could be considered a miracle. The little Indian is a Zuruahã – a tribe from the Amazon that lives practically isolated. She was born a hermaphrodite: her genital organ has characteristics of both sexes. The Indians do not accept those born with a physical disability. For them, they are children unable to survive in the forest.
“The moment she was born and she picked her up, she saw that she was different. And she saw that she would have to kill her”, translates Marcia Suzuki, a YWAM missionary. In cases like Sumawani’s, there is usually no pardon. The Indians commit infanticide: they kill the newborn babies. Her mother, Kusiama, did not escape the rule. The grandmother was the one who changed her mind and took the child in. Then it was the father’s turn to try to kill the girl.
“I took the child myself and told her I was going to kill her. But people from the village asked me to take her to white doctors, that they might be able to solve the problem,” says Naru, Sumawani’s father.
The situation of little Iganani, a year and a half old, is more dramatic. She was born with cerebral palsy and cannot move her legs. She would need daily treatment to make any progress.
The mother, Muwaji, abandoned her daughter, and in this case it was also the grandmother who saved the girl. Then maternal instinct spoke louder: Muwaji changed her mind.
“If I take her to the Zuruahã house and she does not walk, I’ll have to give her poison. My heart is not even thinking of going back to the Zuruahã because of my daughter. I would stay with the whites for a long time if she could get better,” recalls Iganani’s mother.
The two families asked for help from a group of evangelical missionaries who frequent the village. Eight Indians were taken to a site near São Paulo, where they have been for two months.
The hermaphrodite baby’s blood tests proved that she is a girl. The Hospital das Clínicas Hospital in São Paulo was willing to do correctional surgery for free.

“If you indicate the appropriate surgery, at the right time, and if you are treated and take medicine, you will be a perfect woman. You must take medicine for the rest of your life and this permanence is a very delicate situation, especially when it comes to indigenous people, who must return to their community in the middle of the Amazon,” explains Dr. Zan Mustacchi, a pediatrician and geneticist.
But a complaint at the prosecutor’s office is preventing the surgery. Catholic missionaries questioned the withdrawal of the Indians from the village because they would now be exposed to illness and the cultural shock of a large city like São Paulo.
Because of this, Funai (National Indian Foundation) and Funasa (National Health Foundation) have not yet released the documents necessary for the hospital to operate on the Indian baby.
“Funasa’s job is to take care of health. It should be following these cases and if it thought that she deserved transport from outside the area to a hospital, it should have done it itself, “says Funai president Mércio Pereira Gomes.
“If there is a problem with the surgery that has to be done and maintenance expenses of the Indians during this period, Funasa undertakes to pay for all this, but under the guidance, in this case, of Funai,” comments the president of Funasa, Paulo Lustous.
“There is a failure on Funai’s part in seeing people leaving without knowing. A failure, therefore, of the Brazilian state, Funai and Funasa together, we assume that,” says Mércio.
“Beyond thinking about cultural change, I think the life of this child is far more important, even if coming to São Paulo may bring about some cultural change for them,” says missionary Edson Suzuki.
“Due to this whole series of actions that this mission has done, we will demand their withdrawal, we will ask Funasa to refer these Indians to doctors to evaluate their health”, said Mércio.
Sumawani avoided the fate of death the moment her parents gave up on killing her. She won, unknowingly, a great battle – perhaps the most difficult. But the baby still has no guarantee of life in the village. Without the operation, this time Sumawani may not escape the sacrifice.
“If the doctor does not operate, I’ll have to give her poison, she’s going to die. I would also end up taking poison, I would kill myself. We are not afraid to kill ourselves,” said Naru, Sumawani’s father.
“What the Federal Public Ministry would like to add is that it did not come to São Paulo in any way to prohibit the surgery of this child in the setting of the Hospital das Clínicas,” says Attorney of the Republic in the Amazon, André Lasmar.
But the prosecution will only decide the fate of the two little girls after hearing the opinion of a team of experts which has just been formed to study the case.
“If the doctor does not operate, my heart is sadness. If the doctor operates, my heart is a smile,” says Naru.
The Zuruahã tribe has lived near the Purus River in the Amazon for a hundred years. There are a little more than 130 Indians and they are in a reserve larger than the metropolitan region of São Paulo.
Zuruahã was the name of an Indian who wandered alone in this region and was known to the whites. Until the first contact, 20 years ago, the tribe had no name. When the team of anthropologists asked which tribe it was, one of the Indians replied, “Zuruahã” in honor of that lone Indian.
The Zuruahã worship nature. For them everything has spirit, the essence of life; from a small stone to the fruit trees. Only the shaman can see these spirits.
This tribe is the reminiscent of a massacre promoted by rubber tappers at the beginning of the last century. The warriors and spiritual leaders died.