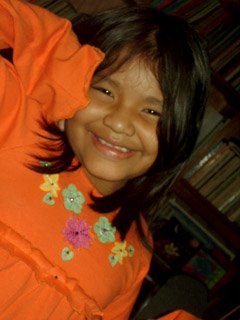 In 1995, a woman from the Suruwaha gave birth to Hakani. Hakani means smile and she was a little girl full of bright smiles and laughter. During the first two years of her life, however, she did not develop the ability to speak or walk causing her tribe to put pressure on her parents to kill her. Hakani’s parents chose to escape this pressure and killed themselves leaving behind Hakani and four other orphaned children.

The responsibility to kill Hakani now fell to her oldest brother. He took his sister a short distance from the communal hut and buried her, still alive, in a shallow grave. Hakani’s muffled cries continued as she lay buried in the makeshift grave.

Many children’s cries continue for hours until a deep silence descends but for Hakani the deep silence never came. Someone heard her crying, saved her from her shallow grave and placed her into the hands of her grandfather, who took her into his hammock. As the oldest member of the family, however, he knew what traditional practice demanded he do.

Hakani’s grandfather took his bow and arrow and shot Hakani. His arrow missed her heart piercing her shoulder. Immediately guilt overcame him and he ate the poison root in an attempt to take his own life. For Hakani the deep silence had still not descended she had survived yet again.

From that day on, at two and a half years of age, Hakani lived as an outcast. For three years she survived on rain water, bark, leaves, and insects and occasionally scraps of food one of her brothers smuggled to her. Along with this gross neglect she was physically and emotionally abused. Children burned her legs because she could not walk, and laughed when she cried. When others walked by they shouted “Why are you still alive?” “You have no soul!” “Why don’t you just die?”

Over time Hakani lost her bright smile and all other facial expression. Her situation grew increasingly worse and yet for Hakani the deep silence did not descend. Eventually her brother, Bibi, rescued her carrying her to the home of a YWAM missionary couple who had been working for 20 years with the Suruwaha Indians in the Amazon Basin.

The missionaries knew Hakani was weak and very ill. At five and a half years of age; she weighed 15 pounds (7kg) and was 27 inches long (69cm). The couple began to care for Hakani as if she was their own child, but it was hard. She responded to nothing, had no facial expressions, no emotion, and would scream and cry when touched because she had gone for so long without physical contact.

The missionaries cared for Hakani in the Amazon Basin, but they knew if they did not get medical treatment she would die. In time they received permission to take Hakani out of the jungle. Within six months of receiving love, care and medical attention Hakani had begun to walk, started to talk, and her bright smile returned to her face. After a year she was double her weight and size. Today Hakani is twenty years old and with a bright laughing smile she dances, sings and loves art. Her voice today is a voice for life.