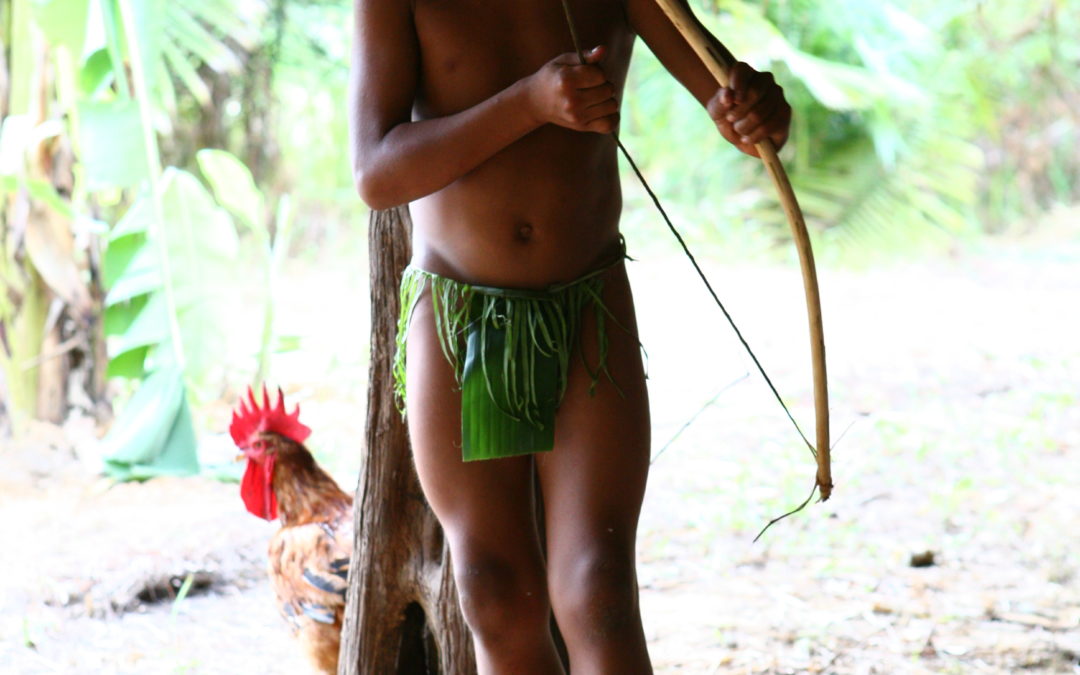 Tiuhawi escaped death as soon as he was born. Son of a widow, with no known father, he would have no right to life if he had been born a girl. But as he was born a man, he was spared. Even so, he grew up surrounded by discrimination and prejudice. Tiuhawi was badly mistreated throughout his childhood. Many spat on him, others beat him, but he was strong and always fought to survive. All he wanted was to grow up, become a hunter, build huts, be respected. He knew that if he became a capable adult he would gain a place in his society. The great misfortune was that Tiuhawi stopped growing when he was around ten years old. He was even more humiliated by others, even more discriminated against. But Tiuhawi resisted and had to find other ways to be accepted by his own people and useful to his community.

In the month of August Tiuhawi took a bold step. He left the Suruwahá village accompanying three sick young people, orphans like him, who needed medical treatment. He decided to face the white world, even knowing the risks. The four of them left in a FUNASA boat and traveled for days down the river, imagining what it would be like to face an unknown world, a language they did not know, a logic that they would be unlikely to understand. But one thing he knew very well – his friends were very sick and needed “white” medicine. They had already tried everything they knew of traditional Suruwahá medicine, but to no use.[1]

Tiuhawi’s group arrived in Lábrea, a small town in the interior of Amazonas, on Sunday, September 3rd. They had been advised by the tribe not to go to Manaus, because the CASAI (housing for Indians, maintained by FUNASA in Manaus) would be, to them, a nightmare. Two families who had been taken to this facility in January of that year were so traumatized that they showed signs of suicide attempts whilst there. This is because the Suruwahá are a tribe of little contact, do not speak Portuguese, and are afraid to live with natives of other ethnic groups and catch diseases for which they do not have immunity. At CASAI, FUNASA mixes indigenous people of different ethnicities, of different levels of contact, with all kinds of infectious diseases, indiscriminately. Tiuhawi’s group arrived with the orientation that they should go to Porto Velho, where they could stay with people who spoke their language and knew their culture, and where they could receive the medical attention that they required.[2]

Brazilian Indians are protected by the State. Guardianship is a special measure designed to protect them from abuse by the surrounding society. However, Decree 5.051 (Convention 169 / ILO) makes it clear in Article 4 (2) that the special measures taken by the State to safeguard indigenous populations “should not contradict the will freely expressed by these peoples.” The decree adds in Article 3 (1) that “Indigenous and tribal peoples shall enjoy full human rights and fundamental freedoms without discrimination.” And Article 4 (3) clarifies that “The enjoyment, without discrimination, of the general rights of citizenship, shall in no way be harmed by these special measures.”

Although the law is clear and guaranteed Tiuhawi and his friends the right to choose where they would have their medical treatment, and with whom they should stay during treatment, the FUNASA at Lábrea was intransigent. Either they agreed to get treatment in Manaus, or they would have to return to the village without treatment. After more than a week of impasse, the two boys gave up and ended up giving in to the pressure. They decided to go to Manaus, even against the guidance of their leaders. The two girls, however, were forced to return to the village, even when they were in pain, and without receiving the treatment they needed. Insensitive and cold, the FUNASA of Lábrea provided a boat to take them back to the village on September 16th.[3]

Is this the kind of “protection” that Brazilian natives need? Is this kind of treatment that these young people deserve? Does the decision of the leadership of the Suruwahá people have no weight? Does guardianship imply control and abuse of power? Do fundamental rights, defined internationally, not apply to Brazilian natives? These young people are returning to the village with a clear message to their people – “Here in the world of the whites you have no voice. Stay isolated, appeal to traditional medicine, and if it does not work, die happy.”[4]

[1] The boy had neurological sequelae from an attempted suicide. The two girls had been suffering for months with very strong stomach pains and toothaches.

[2] As the Suruwahá do not speak Portuguese, their speech was translated in a meeting by a missionary interpreter from YWAM and confirmed by an interpreter who had already been connected to the CIMI (Missionary Indigenous Council). The content of this meeting is documented.

[3] The two young women would have to make the boat trip to the village unprotected, without the company of any Suruwahá men, and probably without an interpreter. In addition, they recorded a report saying that they had been frightened on the trip that brought them from the village, in the presence of non-Indian men who opened the girls’ hammocks, pulled the sheet back and stared at them. The audio file containing the testimony is with the YWAM staff and both FUNAI and FUNASA were informed.

[4] “Approximately 100 years ago, the Suruwahá lost all their shamans and leaders, among other things, through the dissemination and use of their knowledge of medicinal plants and herbs. Therefore, without the shamans, the Suruwahá use the natural resources they possess in a very limited way.”